Requiem at the Refuge by Sister Carol Anne O'Marie 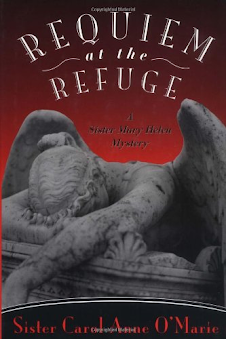 Our parish has a rummage sale room. People donate all sort of items - dishes, decorations, statues, etc - and other people buy these items, making a free-will offering.
Among the items for sale are books. I was looking at the shelves when I spotted a mystery book, Requiem at the Refuge by Sister Carol Anne O’Marie.
I had never heard of Sister O'Marie, but noted on the cover that she had written a series of mysteries with an elderly religious sister as the detective. I later discovered the late Sister had written 11 such mysteries between 1984 and 2006. This particular one was from 2000.
I made a donation and took the book home.
As a mystery, the book was good - not great, but certainly enjoyable and well-written. The characters were interesting, and the story held my attention. And I liked the fact that faith plays a role in the story.
I couldn't help comparing it to another religious sister mystery I had recently read, Sine Qua Nun by Monica Quill (Ralph M. McInerny). McInerny has a tendency to insert his grumbles about the Church into his mystery books. Sister O'Marie's characters are clearly faithful, but the faith is part of who they are, and not an excuse to preach. I prefer that approach.
Would I read another book by Sister O'Marie? Yes, though I don't feel the need to go out immediately and seek more of her books. This particular one was a discard from our local library, and when I looked in the library's online catalog I saw there were no other books by her listed, though there are several listed in our regional library system catalog. I'm glad to know she's still popular enough that people are reading her.
Pax et bonum
Posted by A Secular Franciscan at 8:57 AM No comments: 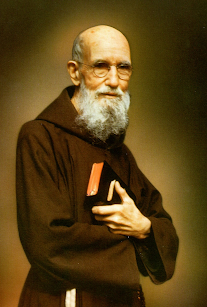 Barney Casey became one of Detroit’s best-known priests even though he was not allowed to preach formally or to hear confessions!

Barney came from a large family in Oak Grove, Wisconsin. At the age of 21, and after he had worked as a logger, a hospital orderly, a streetcar operator, and a prison guard, he entered St. Francis Seminary in Milwaukee—where he found the studies difficult. He left there, and in 1896, joined the Capuchins in Detroit, taking the name Solanus. His studies for the priesthood were again arduous.

On July 24, 1904, Solanus was ordained, but because his knowledge of theology was judged to be weak, he was not given permission to hear confessions or to preach. A Franciscan Capuchin who knew him well said this annoying restriction “brought forth in him a greatness and a holiness that might never have been realized in any other way.”

During his 14 years as porter and sacristan in Yonkers, New York, the people there recognized Solanus as a fine speaker. James Derum, his biographer writes, “For, though he was forbidden to deliver doctrinal sermons, he could give inspirational talks, or feverinos, as the Capuchins termed them.” His spiritual fire deeply impressed his listeners.

Father Solanus served at parishes in Manhattan and Harlem before returning to Detroit, where he was porter and sacristan for 20 years at St. Bonaventure Monastery. Every Wednesday afternoon he conducted well-attended services for the sick. A co-worker estimates that on the average day 150 to 200 people came to see Father Solanus in the front office. Most of them came to receive his blessing; 40 to 50 came for consultation. Many people considered him instrumental in cures and other blessings they received.

Father Solanus’ sense of God’s providence inspired many of his visitors. “Blessed be God in all his designs” was one of his favorite expressions.

The many friends of Father Solanus helped the Capuchins begin a soup kitchen during the Depression. Capuchins are still feeding the hungry there today.

In failing health, Solanus was transferred to the Capuchin novitiate in Huntington, Indiana, in 1946, where he lived for ten years until needing to be hospitalized in Detroit. Father Solanus died on July 31, 1957. An estimated 20,000 people passed by his coffin before his burial in St. Bonaventure Church in Detroit.

At the funeral Mass, the provincial Father Gerald said: “His was a life of service and love for people like me and you. When he was not himself sick, he nevertheless suffered with and for you that were sick. When he was not physically hungry, he hungered with people like you. He had a divine love for people. He loved people for what he could do for them—and for God, through them.”

In 1960, a Father Solanus Guild was formed in Detroit to aid Capuchin seminarians. By 1967, the guild had 5,000 members—many of them grateful recipients of his practical advice and his comforting assurance that God would not abandon them in their trials. Solanus Casey was declared Venerable in 1995, and beatified on November 18, 2017.
- From Franciscan Media
(FYI - Blessed Solanus Casey is my Franciscan Patron Saint.)
Pax et bonum
Posted by A Secular Franciscan at 8:37 PM No comments: 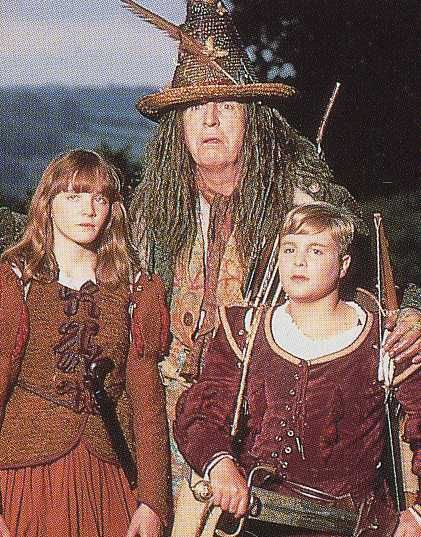 In recent days, two different people mentioned The Silver Chair by C. S. Lewis. - one person declaring his esteem for the book had increased.
I'd read the book years ago - along with the rest of the Chronicles of Narnia. But while I had reread some of the books multiple times - especially The Lion, the Witch, and the Wardrobe, and The Magicians Nephew, which were on summer reading lists for my students - I had not read The Silver Chair since I read it the winter of 1974/75.
I had seen the BBC television production with Tom Baker of Dr. Who fame as Puddleglum (above). The recent mentions of the book brought back fond memories of his performance. (As for the production, well, terrible special effects!)
So having finished a more complex book (Archbishop Charles Chaput's excellent Things Worth Dying For: Thoughts on a Life Worth Living) I decided to give it a reread.
There were many delightful elements - and I enjoyed the allusions to or outright mentions of other books and characters in the series. It was clearly a children's book, but that's fine by me.
Glad I reread it.
Pax et bonum
Posted by A Secular Franciscan at 12:15 PM No comments:

Stations of the Cross Procession for the End of Human Trafficking 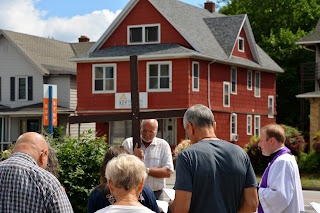 July 30 we held a Stations of the Cross Procession praying for the end of human trafficking. 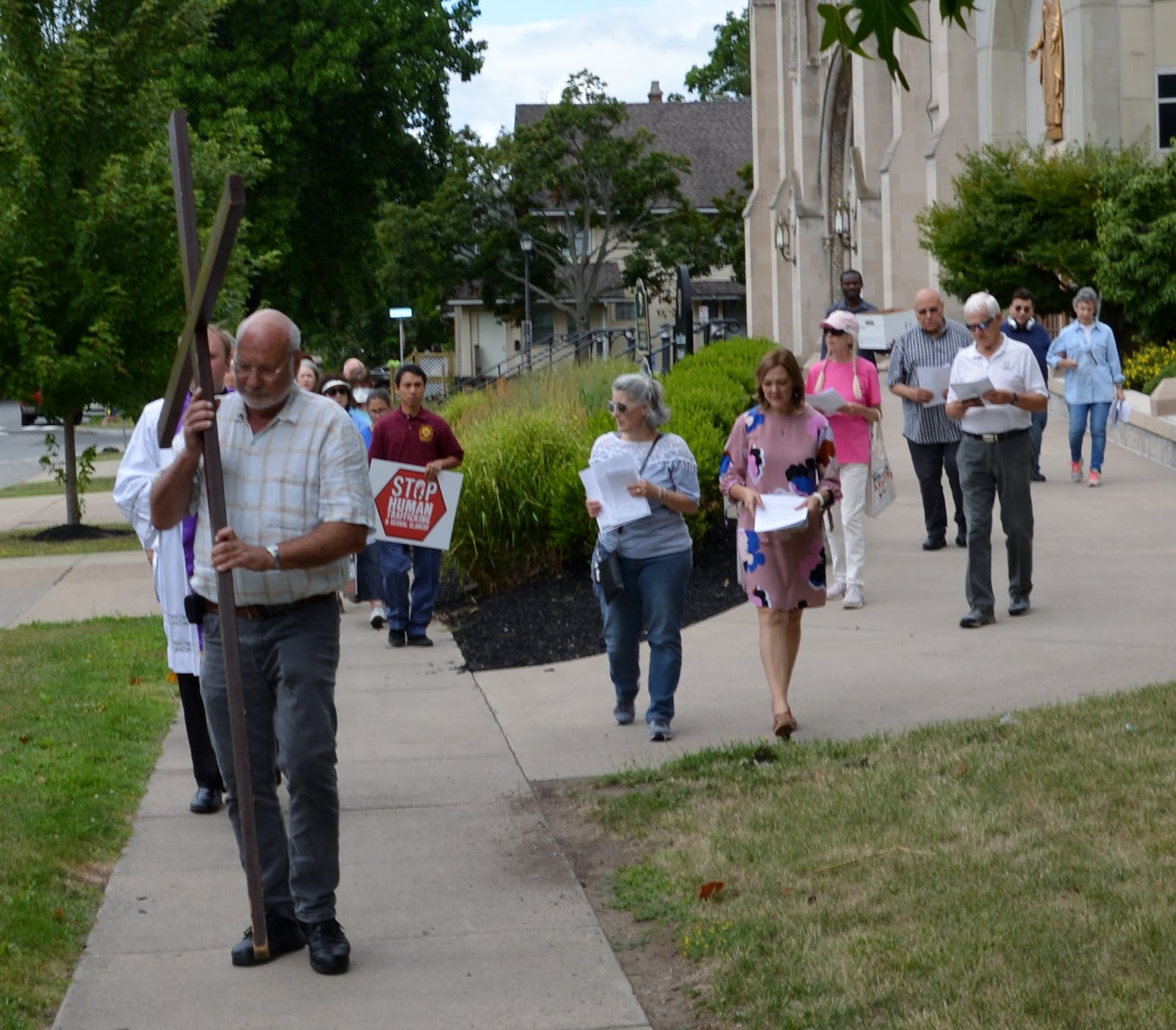 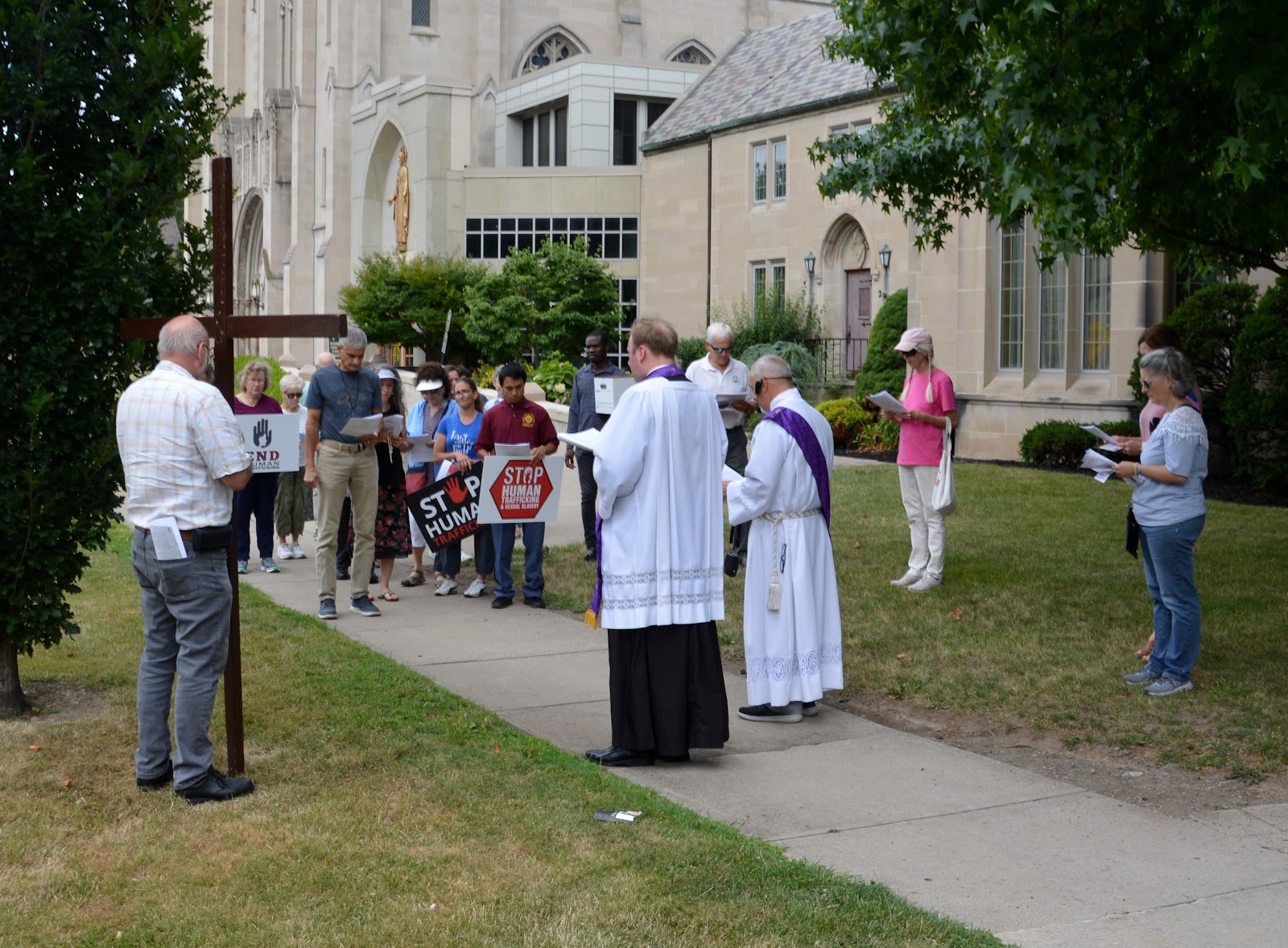 We stopped 14 times to pray and witness. 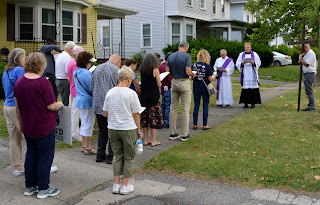 In preparation for the Procession, we heard a presentation from members of Angels of Mercy, who work to educate about human trafficking, and to help the vulnerable - especially girls and women - to avoid getting caught up in trafficking, or to escape it. 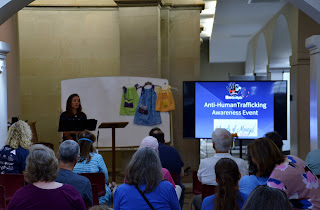 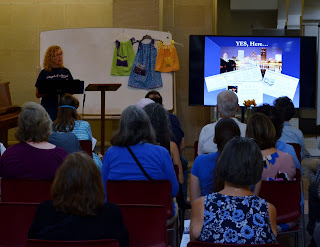 More than 200,000 runaways each year are sex trafficked. New York state is one of the leading destinations in the U.S. for trafficking. 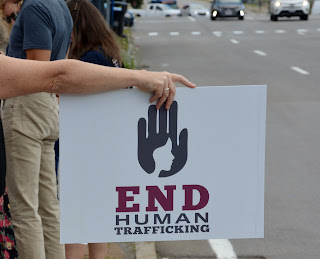 Pax et bonum
Posted by A Secular Franciscan at 6:04 PM No comments:

The Bible on Foul Language


Let there be no filthiness, nor silly talk, nor levity, which are not fitting; but instead let there be thanksgiving. - Ephesians 5:4

Let no evil talk come out of your mouths, but only such as is good for edifying, as fits the occasion, that it may impart grace to those who hear. - Ephesians 4:29

But now put them all away: anger, wrath, malice, slander, and foul talk from your mouth. - Colossians 3:8

Pax et bonum
Posted by A Secular Franciscan at 8:28 AM No comments:

Every year (except those pesky covid ones) The Society of Gilbert Keith Chesterton holds a national conference. This year right now it is taking place in Milwaukee.
I am not there.
While I have attended the Rochester regional conference every year, I have never attended a national one. I hate travel and staying in a place other than home. I'm not comfortable around a lot of people I don't know very well. I'm quirky that way.
At the conference, they have a clerihew contest. In the contest, they have first, second, third places, and honorable mentions in three categories: Before Chesterton, During Chesterton, and After Chesterton. There's also a poem picked out as the "worst" and another picked as the "best." In keeping with the nature of clerihews and the personality of Chesterton, it's all done in good humor.
I've submitted by e-mail in the past. I did so this year:
Before Chesterton
Elizabeth Barrett Browning
sat in her parlor frowning.
Robert had bought her something labeled "Serra da Estrela cheese,"
that clearly wasn't Portuguese.
The replacement Apostle Matthias
was chosen by lot, not by bias.
Alas, except for his selection.
he's eluded all other historical detection.
--- During Chesterton
Hilaire Belloc
walked off the end of a dock,
but being in the middle of a debate,
he failed to recognize his fate.
Lord Peter Wimsey
was never deterred by evidence flimsy,
but his confidence suffered years of strain
when faced with the mystery of Harriet Vane.
--- After Chesterton
Alfred Hitchcock
developed a bad case of writer's block
despite his use of a bran muffin
as the MacGuffin.
As an actor, Tom Baker
was more of a character than a heart-breaker.
But I think his Doctor is worthy of a clerihew,
even though at mention of his name some folks just say, “Who?"
In the kitchen, Julia Child
was amusing but never wild.
To fill that void
we had to rely on Dan Aykroyd.
Megan Rapinoe
picked up a banjo.
As she played a tune on it,
she sang, "That #$@&*! is full of %@!#*"
I don't know if I will win, or, if I do, when I will find out. They usually print the winning entries in an issue of Gilbert in the fall.
Pax et bonum
Posted by A Secular Franciscan at 8:53 AM No comments: 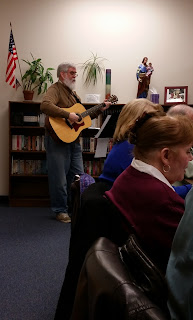 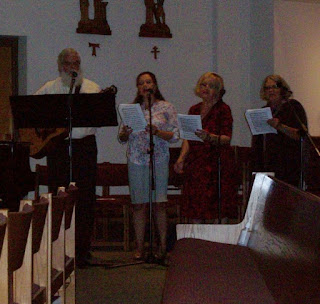 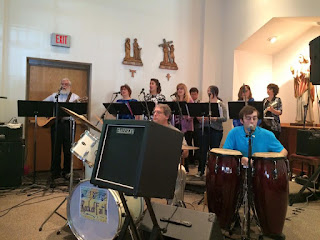 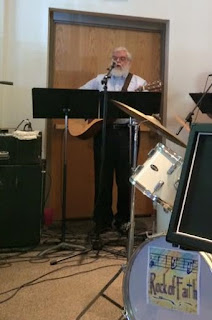 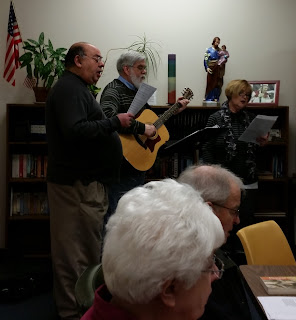 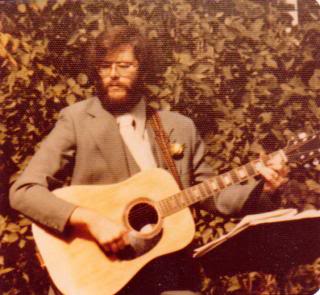 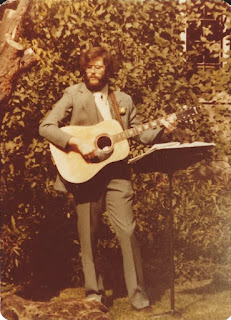 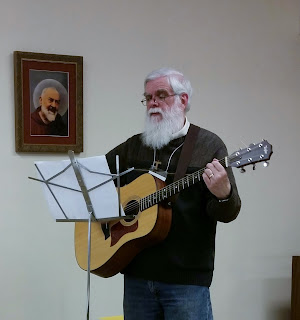 Pax et bonum
Posted by A Secular Franciscan at 9:01 AM No comments: